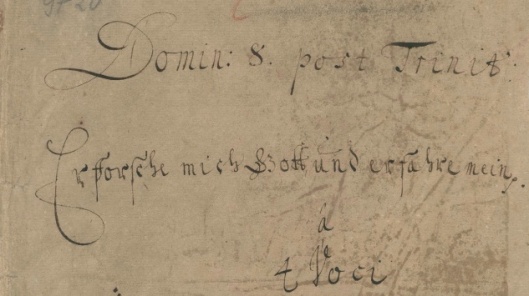 Excerpt from the title page of the manuscript, Staatsbibliothek zu Berlin, Preußischer Kulturbesitz

Previously on Weekly Cantata: Beginning on May 30, 1723 (the first Sunday after Trinity) Bach presented a long cantata of 10 to 14 movements each to the Leipzig congregations every Sunday, including cantatas for the special occasions of St. John (Johannis) on June 24 and the Visitation of Mary (Mariä Heimsuchung) on July 2.

However, only a few of these were newly written in Leipzig. The first two cantatas (75 for Trinity 1 and 76 for Trinity 2) were new, but he had probably already prepared them in Köthen, before moving to Leipzig.* For several weeks after that, he wrote almost no new works, but “recycled” creations from his Weimar period, adding recitatives and sometimes changing aria texts to make them better suited for the specific Gospel readings in Leipzig, and adding chorales to make them longer. The only two new works he wrote in Leipzig in those first months were the “additional” cantata 24 for Trinity 4 and the modest cantata 167 for St. John.

With the exception of cantata 167, all cantatas in the first seven weeks after Trinity were 10 to 14 movements long, divided over two parts, one before the sermon, one after.

What changed for this 8th Sunday after Trinity in 1723 (July 18, 1723) was not that Bach stopped recycling older works—scholars think that this cantata 136 Erforsche mich, Gott, und erfahre mein Herz most probably was an assembly of several different unknown compositions from Köthen**–– but that the cantatas became significantly shorter in length: starting with this one for Trinity 8, cantatas will generally be only around six movements long. We don’t know the reason for this: an order or request from the Leipzig Council, Bach’s own decision that it would be too much work to write such a long work every week, or Bach’s experience that the notable members of the congregation would not actually arrive in the church until right before the sermon?

For this cantata 136 Erforsche mich, Gott, und erfahre mein Herz, I prefer the recording by Bach Collegium Japan, because of their interpretation of the opening chorus, alto aria (with one of my favorite countertenors, Kai Wessel), bass recitative (excellent job by Peter Kooij), and tenor/bass duet (the voices of Makoto Sukurada and Peter Kooij are a wonderful match here). Listen to this recording on Spotify.

Read the German text with English translation of this cantata here. Find the score here.

About ten years later, Bach reworked the glorious music of the opening chorus of this cantata into the In Gloria Dei Patris, Amen of his short Mass in A Major (BWV 234). This entire opening chorus is terrific, already from the very beginning: before the fugue even starts, its theme already sounds in the horn part, and then in the soprano part.

The alto aria elaborates on the Doomsday which was already announced three times in the tenor recitative. To make the vocal part of this aria sound a bit more threatening, Bach composed a new, fast middle part for the Leipzig performance. I enjoy listening to Kai Wessel’s voice, which is deep and clear at the same time, and this aria truly showcases his talent and skills.

At first, the closing chorale seems like a normal, “simple” setting, the way it will be in most cantatas after this, but when you pay a bit more attention, you’ll hear that the first violins play a beautiful ornamental part which floats over the vocal lines.

*The paper of the manuscripts has been declared “non-Leipzig” paper by the researchers, and the compositions have many similarities and cross-references. Read more about this in the posts about cantata 75 and cantata 76.

**The manuscript is written very neatly, as if existing work was being copied, the opening chorus doesn’t really match the rest of the work in style or key, and the tenor-bass duet is very similar in style to the secular cantatas Bach wrote for the Köthen court.