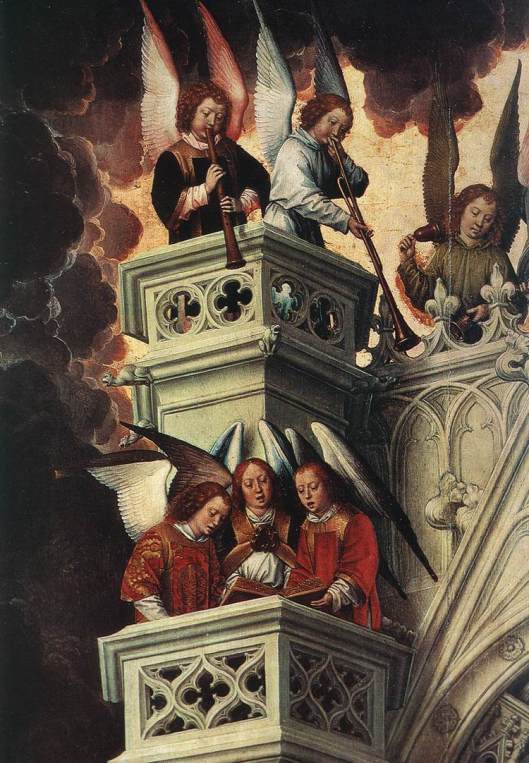 The least gruesome detail of Hans Memling’s “The Last Judgment”, a triptych painted between 1467 and 1471. National Museum, Gdansk, Poland.

This week I’ve been trying harder than ever in my life to find islands of beauty in a sea of ugliness. I found some: I witnessed communities coming together, had a very uplifting choir rehearsal, attended a concert at my daughter’s music school where the director gave a heart-felt speech, and the choir director had included We Shall Overcome in their part of the program. I have talked with my children about what it means to “stand up” for the millions who will suffer discrimination in the next four years in this country.  I realize I have many different readers of this blog, and that some of you might not share my political opinion. But I would urge you to be there for each other. And whomever you had been meaning to contact, whether it is a friend you should have apologized to four weeks ago, someone you know who is having a hard time, a relative you haven’t called in too long, or your representative in the House or Senate, write that letter, make that phone call. Don’t put it off.

In today’s cantata 90 Es reißet euch ein schrecklich Ende (A terrible end shall sweep you away), written for November 14, 1723, the 25th Sunday after Trinity, it is not easy to find beauty either, at least not the soul-soothing kind, since it is based on the Bible story of The Last Judgement, which is an ugly concept in my opinion. However this story was important in Bach’s time, and it was thus appropriate to let the Trinity season go out with a bang: two weeks in a row of impressive cantatas, including some of the most magnificent (and difficult!) arias for bass and trumpet in all of his work.

While Bach’s audience (the congregations of the St. Thomas and St. Nicholas churches in Leipzig) got plenty of tenor drama in the fall of 1723, it had been a long time (August 1, 1723 to be exact) since they had last heard an operatic aria for bass, with the majestic trumpet as accompanying instrument.

Since this emotional week also calls for some nostalgia, I’m going with the Leonhardt recording of this cantata, because I grew up listening to Max van Egmond sing these bass arias. The trumpet player on that recording however barely makes it, so if you would like to listen to a better player in that particular aria, and also see a close-up of the instrument, watch this video (of the bass aria only) by the Bach Foundation, with Patrick Henrichs on trumpet.

Find the text here, and the score here.