Presentation at the Temple

This past Wednesday, February 2, was the feast of the Purification of Mary, or The Presentation of Jesus in the Temple. According to Jewish custom (as described in Luke 2:22-38), 40 days after the birth of a first-born son, his parents bring him to the Temple for a ceremony in which the mother offers a pair of doves for the purpose of her own purification, and the child is “bought back” from the Temple for money. When Mary and Joseph bring Jesus to the Temple, the prophetess Anna, an 84-year-old full-time resident of the Temple, is there too, as well as Simeon. Simeon was a devout Jew who had been promised by the Holy Spirit that he would not die until he had seen the Messiah. Upon seeing the child, Simeon offers a song of praise, known as the “Song of Simeon” or the “Nunc Dimittis.” He also speaks a prophecy to Mary. Read the complete Gospel text here.

I have written several blog posts about this over the past years, discussing how the early Christian church tied pre-Christian end-of-winter rites to their own feast days of Candlemass and the Purification of Mary. Whether Bach writes a joyful cantata about new beginnings or a more solemn one for this feast day, there is always a bright spotlight on Simeon’s words “Now let your servant die in peace” (Nunc Dimittis).

In his German-language Bach cantata podcasts, prominent Bach scholar Michael Maul has now twice pointed out the influence of the existing art works depicting The presentation of Jesus in the Temple on how Bach and his contemporaries might have seen this story. I loved hearing this, because that’s what I almost always try to do in this blog too, to find an example of the kind of imagery Bach might have had in mind when thinking of the Bible stories.

There is a large number of paintings about the presentation at the Temple, and Simeon plays a central role in each of them. Maul gives the example that the Bible doesn’t specify Simeon’s age and that references to “the old Simeon” by Bach and his librettists must come from the long beard and grey hair in all the paintings.

So, this week, I decided to do a bit of digging around in those art works and the Bible story.

Reading the Gospel of Luke (see above), it seems logical to me that artists thought of Simeon as an old man, since it says “that he would not die until he had seen the Lord’s Messiah.” From the detailed description of the prophet Anna’s old age it is then of course an easy step to also think of Simeon as an octogenarian.

What I did find surprising is that in many of the paintings, especially the earlier ones, and even in the discussions by art historians such as Zuffi, Simeon gets assigned the role of the priest on duty at the temple, when he was just a visitor that day. It is an interesting question how and when that piece of fiction was born, but it is just a side story here.

In several paintings, such as all presentations by Memling (see here and here), Lorenzetti, and Lochner (Darmstadt, see above), the focus is on the ceremony. Jewelry, doves, money, and clothing are painstakingly portrayed, but there is no emotion. But then there are the paintings that seem a bit more intimate, the earliest of these the “Lisbon presentation” by Lochner, from ca. 1447, see here directly above. In this painting it is Joseph who’s carrying the doves, Mary is empty-handed and just praying. This painting is not about her. Jesus is touching Simeon’s beard, and Simeon seems to be crying. Daniel Levine offers the explanation that Simeon’s sadness is caused by his vision of the child’s future, as he says to Mary: “This child is destined to cause many in Israel to fall, and many others to rise. He has been sent as a sign from God, but many will oppose him. As a result, the deepest thoughts of many hearts will be revealed. And a sword will pierce your very soul.” The painting at the top of this post, by Bellini, might also fall in this category.

We see this happening even more clearly and directly in Rembrandt’s representation of the same story, almost two centuries later. There is no ceremony at all here, only a conversation between two people, with Simeon clearly speaking to Mary.

Thus it seems as if at least some of the artists were especially moved by the foreshadowing of the Passion story in Simeon’s words. Whether Bach had seen those specific paintings or not, I don’t know of course. But it is clear that the idea existed at the time, and it is a bit more proof for the theory I expressed in this blog post about Cantata 125, that this cantata looks ahead to the St. Matthew Passion. This is all the more motivation for me to start writing more about that Passion in the coming weeks. 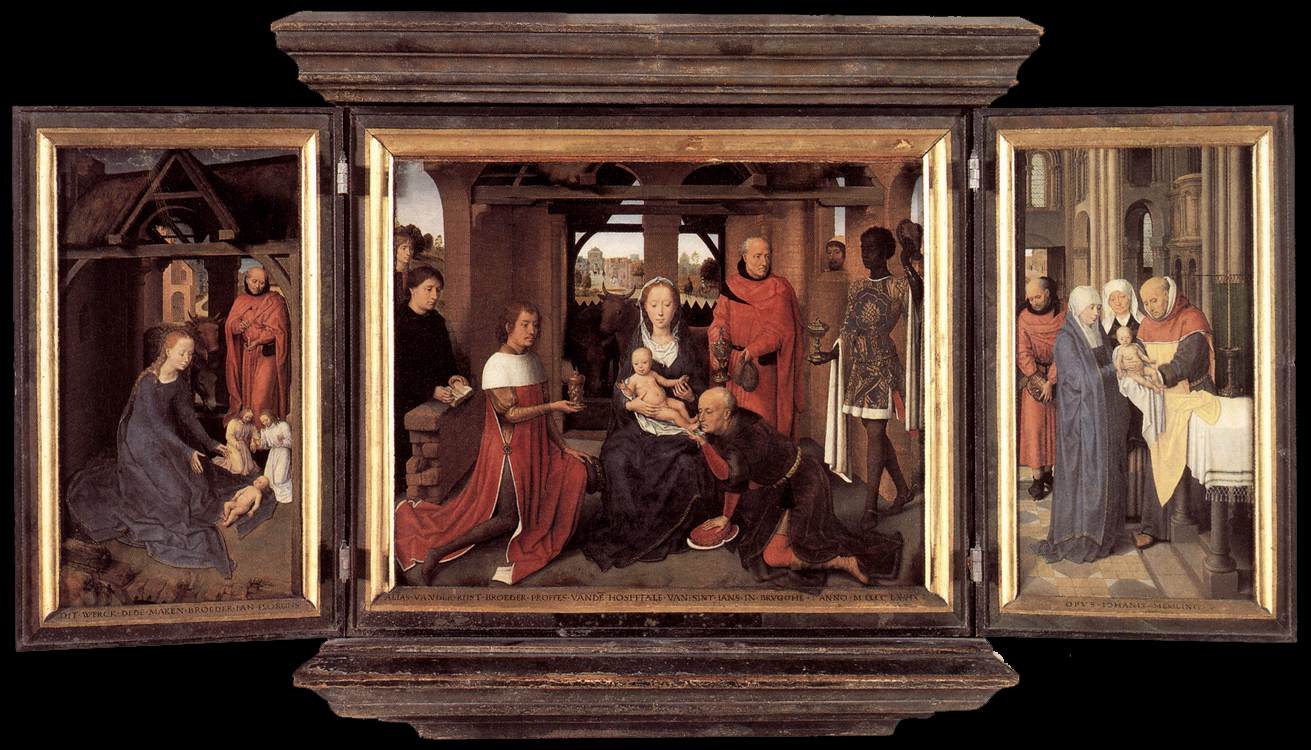 “Adoration of the Magi” triptych of Jan Floreins by Hans Memling, 1479. Memling Museum (Old St. John’s Hospital), Bruges, Belgium. The right-hand panel features “The Presentation at the Temple,” with the Temple really being the former St. Donaas church in Bruges.

If you are reading this in the email you received from WordPress, please click on the title of this post to enjoy the paintings and the formatting 🙂

This post is almost two days late, as it was for Friday February 2, the feast of the Purification of Mary, or Candle Mass, or Presentation at the Temple. If you have time, please read how this holiday was strongly connected to folk culture in my post from last year. In Lutheran reality, this was the day when Simeon’s song of praise Herr, nun lässest du deinen Diener in Friede fahren  or Nunc Dimittis was celebrated. With his chorale Mit Fried und Freud ich fahr dahin Luther turned Simeon’s song of praise into a message of “Now I can die in peace.” This is why all five cantatas (The famous Ich habe genug 82, 83, 125, 157, and 158) Bach wrote for this holiday are mostly about the joy of dying.

Since I’m following Bach’s chorale cantata writing in Leipzig in 1725, I’m featuring Cantata 125 Mit Fried und Freud ich fahr dahin, written for February 2 of that year, and based on that same chorale by Luther.

My favorite overall recording of this cantata is Herreweghe’s recording from 1998, with Ingeborg Dantz, alto; Mark Padmore, tenor; and Peter Kooij, bass. You can find it here on YouTube. Please consider supporting the artists by purchasing the album on Amazon or on iTunes. It also includes the stunning Cantata 8 (Herreweghe’s personal favorite!) and the beautiful Cantata 138.

Please find the German text with English translations of this cantata here, and the score here.

There are some similarities with last week’s cantata, such as the bass solo that is made up of bits of recitative and bits of chorale melody, but already in the opening chorus a new day is dawning. If you read the history of today’s holiday in my post from last year, you know that Candle Mass was a natural time of year to start with something new.

Could the new inspiration in Bach’s brain be the St. Matthew Passion? It is not unlikely at all. Van Hengel suggests that the opening chorus has elements of the St. Matthew opening chorus, but then argues that that piece was not written yet in 1725. However, Gardiner (in his book Music in the Castle of Heaven) makes a strong case that Bach might have initially planned to have the St. Matthew Passion ready for Good Friday 1725. I’ve pointed out before that we can find preludes to the “Great Passion” in Bach’s cantatas as far back as the fall of 1723 (see posts about cantatas 105 and 46), so it is not unlikely that Bach was working on this in January 1725.

Keeping all this in mind, it is striking that the first aria after the opening chorus is an alto aria in St. Matthew style, full of pietism. Watch Alex Potter (keep reading to find out more about him) sing this aria with the J.S. Bach Foundation here on YouTube. The instrumentation resembles the “Aus Liebe” soprano aria from the St. Matthew Passion: there are no organ chords in the bass, only repeated cello notes, and for the rest it is just flute and oboe da caccia, an unusual combination.

Because of the  many connections with this Cantata 125 I’m now going to sneak in a mini review of the Herreweghe/Collegium Vocale concerts I attended in Europe this past week.

Applause at the end of the concert in the Eglise St. Roch in Paris, January 30, 2018. From left to right in front row: Peter Kooij, Thomas Hobbs, Philippe Herreweghe, Alex Potter, Dorothee Mields. Photo by Aube Neau/Luc Barrière, published with permission.

Let’s take the alto aria from Cantata 125. I call this type of aria a “floating aria” because it has no real basso continuo: there is no melodic line in the cello or chords in the organ, i.e. no foundation for the singer to stand on. These floating arias are incredibly beautiful and the stuff of goose bumps, but also incredibly challenging for the vocal soloist. In the terrific concert in Paris on Tuesday January 30, soprano Dorothee Mields had two such arias: the “Qui tollis” from the Mass in A Major (BWV 234)* and the “Wir zittern und wanken” from Cantata 105. She did an absolutely marvelous job in both of them, but her singing was the most mesmerizing in the “Wir zittern und wanken” aria. Cantata 105 stood out during that Paris performance anyway in my humble opinion. It simply has the best opening chorus of all cantatas Collegium Vocale performed in the three concerts I attended. On top of that, the group (including soloists Thomas Hobbs and Peter Kooij) recorded this in 2012, and you could tell it was still in everyone’s bones and it was a pleasure to see Herreweghe direct the strings as well as the soloists. One of my favorite bass ariosos occurs in that cantata (it makes me think of the “Am Abend da es kühle war” from the St. Matthew) and Peter Kooij’s strong rendition almost made me cry.

Detail of right-hand wing of the “Adoration of the Magi” Jan  Floreins triptych by Hans Memling, showing the Presentation at the Temple, or Mary presenting Jesus to Simeon

And then on to countertenor Alex Potter. It was in Bruges’ St. John’s Hospital museum that I saw the Memling painting featured in this post, and this is also where I ran into Alex Potter and was able to tell him how much I enjoyed his singing on Friday January 26. During the concert in Paris on January 30 his most impressive performance was the “Quoniam” aria from the Mass in A Major (BWV 234)**, which I heard in Bruges on Sunday January 28 and again in Paris on Tuesday January 30. He had a clear understanding of the text, made the music soar, and seemed to passionately enjoy what he was doing. It was a joy to watch and listen to.