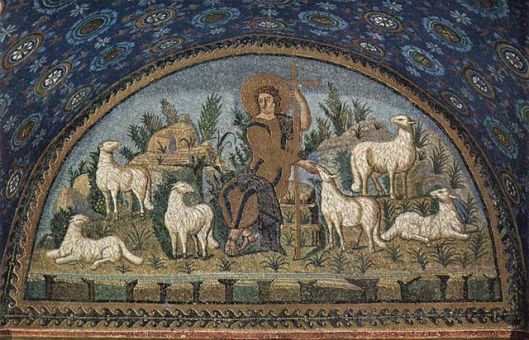 The Good Shepherd, mosaic in the Mausoleum of Galla Placidia, Ravenna, 1st half of the 5th century

There are three beautiful cantatas for this second Sunday after Easter, or “Misericordias Domini” Sunday: BWV 104, 85, and 112. Illustrating the “good shepherd” scripture for this Sunday (John 10, verse 12-16), Bach incorporated pastoral themes or orchestration in each of these cantatas.

I’ve decided to focus on cantata 85 Ich bin ein guter Hirt, written for April 15, 1725. Of all three cantatas, this is the one I remember the best from my childhood, because of the  tenor aria “Seht, was die Liebe tut.” Also: Last week, I already mentioned the similarities between cantata 6 (for Easter Monday 1725), and cantata 42 (for the first Sunday after Easter 1725). This cantata 85 is the culmination of that “sub group” within the cantatas from 1725.

Which recording to listen to?

While I think that the tenor aria on the Harnoncourt recording from 1977, exquisitely sung by Kurt Equiluz, is still the best rendition of this aria ever, I am enamored by Bach Collegium Japan’s recording of this cantata, and I think this is the best “overall” and also the most noteworthy because of the use of a  violoncello piccolo da spalla.

Listen to Bach Collegium Japan’s recording of cantata 85 on Spotify (currently no YouTube  available of this recording).

After lovely and convincing singing by Peter Kooij (bass) in the opening arioso (Jesus saying “I am a good shepherd”), we get a sublime performance by Robin Blaze (countertenor) of the alto aria “Jesus ist ein guter Hirt,” which also features the unusual violoncello piccolo da spalla. Someone could probably write an entire PhD thesis on the difference between the  violoncello piccolo  “da spalla” (held on the shoulder, like a violin),  and the violoncello piccolo “da gamba”  (held between the legs,  like a cello), and whether Bach meant the one or the other when he wrote a part for “violoncello piccolo.”  Most recordings (Harnoncourt, Gardiner, Coin) feature the smaller version of the cello, but Bach Collegium Japan’s recording features the “large violin” variety, played by the same person who built it in 2004, Dmitry Badiarov. If you would like to read more about the instruments, there’s a good article by Badiarov here. 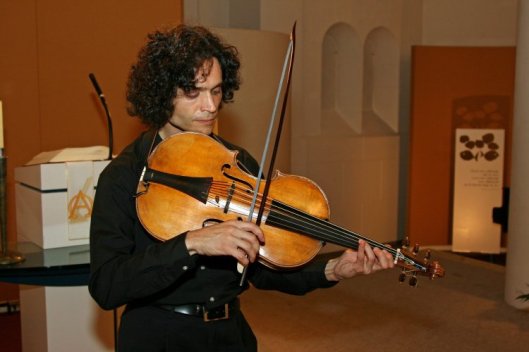 Following this, we hear a radiant soprano solo chorale with oboe accompaniment (which makes me think back to the soprano solo chorale from cantata 6, in that case with the violoncello piccolo “da gamba”), beautifully sung by soprano Carolyn Sampson and expertly played by oboists Masamitsu San’nomiya and Atsuko Ozaki.

And when you didn’t think it could get any better, here comes a tenor recitative which in text and string accompaniment strongly refers to Jesus’ recitative from the St. Matthew Passion “Ich werde den Hirten schlagen, und die Schafe der Herde werden sich zerstreuen.” (Christ, having arrived at the Mount of Olives, reminds his disciples of the prophecy that the shepherd will be slain and the sheep will scatter).

With this only recitative in cantata 85, Bach has gotten everyone’s attention, so now we’re ready for the jewel in the crown of this cantata: the tenor aria “Seht, was die Liebe tut.” It is one of the most lyrical and lovely among all Bach’s tenor arias.

Seht, was die Liebe tut.
See, what love does.
Mein Jesus hält in guter Hut
My Jesus in his own safekeeping
Die Seinen feste eingeschlossen
keeps those who are his own firmly enclosed
Und hat am Kreuzesstamm vergossen
and on the beam of the cross he has shed
Für sie sein teures Blut.
for them his own precious blood.