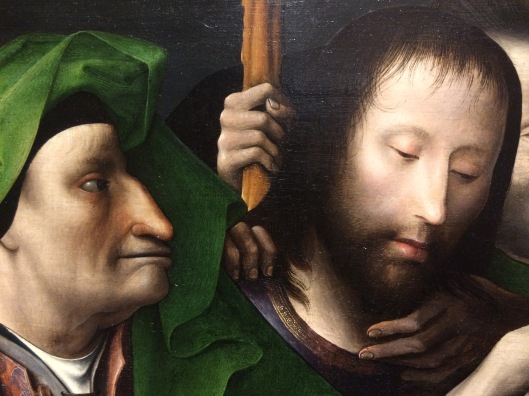 Detail of The Arrest of Christ by Hieronymus Bosch, ca. 1515. San Diego Museum of Art.

As I’ve mentioned over the past few months, Bach might have initially been planning to perform a St. Matthew Passion on Good Friday in 1725 in Leipzig.

If he was indeed planning that, he didn’t finish it in time. Did he run out of time, did he have a conflict with the Leipzig City Council, or did he change his mind? We don’t know. Fact is that on Good Friday 1725 he performed a new version of his St. John Passion from the year before. The most notable difference is the new opening chorus: O, Mensch, bewein dein Sünden groß instead of the Herr, unser Herrscher from the year before.

Find Herreweghe’s recording from 2001 of that 1725 St. John Passion here on YouTube.

But let’s just leave the St. Matthew / St. John discussion for what it is, and just look at that opening chorus. Having followed Bach’s 1724/1725 chorale cantatas in the order he wrote and performed them, it is not a stretch to consider that Bach might have been working up to this elaborate chorale fantasia since February 2. I mentioned in my post for that day that it felt as if something new was coming.

When you look at Cantatas 125, 126, 127, and 1, the four cantatas Bach wrote and performed between February 2 and March 25, you see a beautiful line-up of chorale fantasias, one even more special than the other. So perhaps there was no stress or doubt at all in Bach’s mind about what to write for Good Friday 1725, at least not as far as the opening chorus was concerned. He might have been planning for O, Mensch to open his Good Friday passion since the end of January, and might have been doing studies for it in Cantatas 125, 126, 127, and 1.